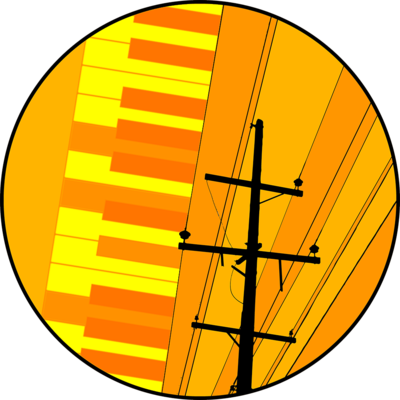 I spend an awful lot of time thinking not about musical structure, but about the individual sounds involved - particularly background and drone sounds. This can range from multi-layer crowd/conversation backdrop to bands like The Blue Up, to that one Dutch children's song where the underlying rhythm and texture was entirely train-on-tracks recorded on site.

The same thing moves me in electronic sounds - the texture to the opening notes of Covenant's 2D, or of the voice manipulation in D Block and S-te-fan's Ghost Stories.

Not that I'm going anywhere with this. Just laying out pieces for maybe picking up later as I'm considering how to grind MIDI stuff through Fruity Loops and maybe one day afford Infected Mushroom's VST kit.

To maybe one day get that perfect sound, that one Met recording of Der Hölle Rache from Die Zauberflöte where it all comes together, or the bur in Cohen's voice from You Want It Darker.

Sometimes I feel like I might be in Mona Lisa Overdrive, looking for the shape, but as fractal subsets rather than a contiguous whole. And if I find one of those sounds, I guess I'll have to somehow make music with it.

Which is the hardest part. Performing other people's stuff - at least voice and electronic rebuilds - is easy. Doing up my own, not so much.